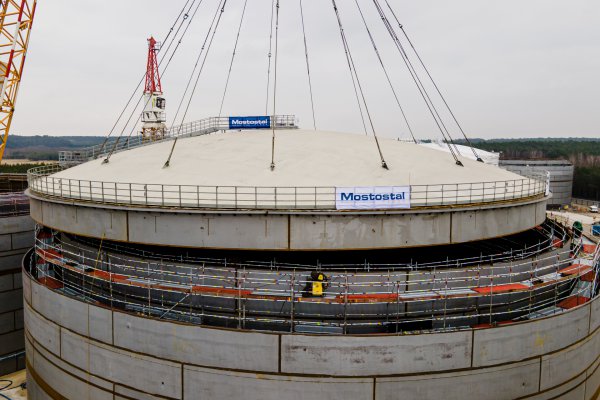 We have completed the complicated process of installing roofs on seven tanks that we are building at PERN fuel depots in Nowa Wieś Wielka, Dębogórze and Koluszki.

The installation of the tank roof is often the biggest challenge during construction, as it is a very difficult and precise operation which can be prevented by even a minimal change in the weather. The roof structure, in the case of the 32,000 m3 tanks we are building for PERN, has a diameter of 43 m and weighs 220 tonnes. The structure is prepared in the pre-assembly yard next to the tank, and then mounted on the tank. For this task, a Terex SL3800 crawler crane was used to lift the roof to a height of about 20 m and move it onto the tank.

- The Mostostal Płock and Mostostal Warszawa consortium, thanks to its engineers experienced in industrial construction, performs the most technologically advanced and precise operations, such as roof assembly on tanks. Our Consortium has already successfully performed similar tasks at the construction sites of PERN's tanks in Boronów and Rejowiec. It was the same now, as the assembly of roofs in Nowa Wieś Wielka, Koluszki and Dębogórze was completed on time despite the high dependence on weather conditions. It is a merit of the whole Mostostal Płock team and very good cooperation on the construction site with the employees of our consortium member Mostostal Warszawa, for which I would like to thank - says Robert Kowalski, Member of the Management Board of Mostostalu Płock.

Construction of the tank at the Fuel Depot in Debogórze took place using a different, more labour-intensive method. It is a traditional method involving the assembly of the individual elements of the tank - lips, roof transoms, sheet metal sheathing - one by one, without pre-assembly. Despite this, the tank is currently at the same stage of construction as the tanks in Nowa Wieś Wielka and Koluszki.

The construction is taking place within the scope of the task, which Mostostal Płock will realise in a consortium with Mostostal Warszawa. The task includes construction of seven storage tanks with the capacity of 32 thousand m3 each at the PERN Fuel Depots in Nowa Wieś Wielka (3 units), Koluszki (3 units) and Dębogórze (1 unit). The planned completion date for all contracts is July 2022.

Click to read more about the task that the consortium of Mostostal Płock and Mostostal Warszawa is performing for PERN.