The complicated construction phase at the PERN base in Rejowiec was successfully completed! 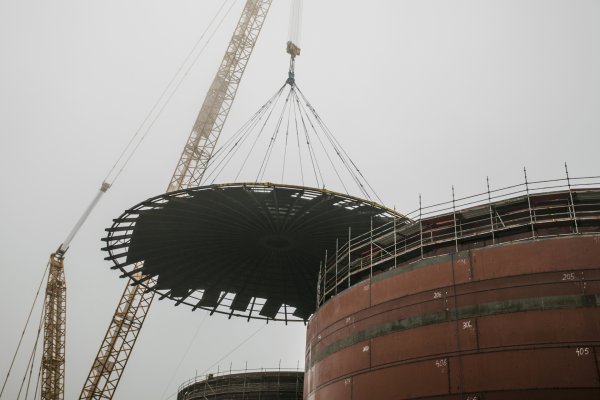 We have completed the complicated process of installing roofs on the tanks that we are building at the PERN fuel base in Rejowiec.

Mounting the tank roof is one of the biggest challenges during construction. This is a very difficult and precise operation that can be prevented by even a minimal change in the weather. The roof structure, in this case 43 m in diameter and weighing 170 tons, is prepared in the yard next to the tank and then assembled on the tank. For this task, an LG1750 wheeled crane with a maximum lifting capacity of 750 tons was used, which lifted the roof to a height of about 30 m and transferred it to the tank. The total weight of the crane with the load was 950 tons. The operation was repeated a few days later for the second tank.

- The operation carried out in Rejowiec is an important stage of a technologically advanced and precise task that Mostostal Płock and Mostostal Warszawa jointly carry out for PERN - says Jacek Szymanek, President of the Management Board of Mostostal Płock. - We can perform such tasks thanks to the potential of our organization: a team of engineers experienced in energy and industrial construction.​

The construction is carried out as part of a task that Mostostal Płock will implement in a consortium with Mostostal Warszawa. The task includes the construction of a storage tank with a capacity of 10,000 m3. m3 at the Fuel Depot in Boronów and two storage tanks with a capacity of 32 thousand. m3 at the Fuel Depot in Rejowiec.

Click to read more about the task that the consortium of Mostostal Warszawa and Mostostal Płock is carrying out for PERN.